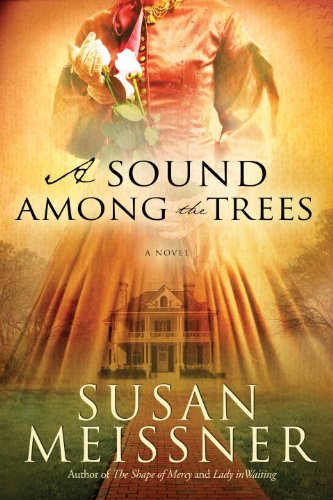 A Sound Among the Trees: A Novel

First Line:  “The bride stood in a circle of Virginia sunlight, her narrow heels clicking on Holly Oak’s patio stones as she greeted strangers in the receiving line.”

A house shrouded in time.

A line of women with a heritage of loss.


As a young bride, Susannah Page was rumored to be a Civil War spy for the North, a traitor to her Virginian roots. Her great-granddaughter Adelaide, the current matriarch of Holly Oak, doesn’t believe that Susannah’s ghost haunts the antebellum mansion looking for a pardon, but rather the house itself bears a grudge toward its tragic past.


When Marielle Bishop marries into the family and is transplanted from the arid west to her husband’s home, it isn’t long before she is led to believe that the house she just settled into brings misfortune to the women who live there.


With Adelaide’s richly peppered superstitions and deep family roots at stake, Marielle must sort out the truth about Susannah Page and Holly Oak— and make peace with the sacrifices she has made for love.

Favorite Quote from the Book:

“Just because you hear a rustle in the trees, that doesn’t mean that the bogeyman is preparing to pounce on you the minute you turn your back.  Sometimes the rustling is just God sending a breeze to cool your skin after a hard day in the blazing sun.  But I suppose the notion of the bogeyman makes the story more interesting.”

This beautifully lyric book travels seamlessly between the present day and the civil war era while telling the stories of the antebellum mansion Holly Oak and her inhabitants.

First of all, I can’t get over how unbelievably lovely this novel was.  I’m a big fan of writers who use tons of descriptives and imagery to make people and places come alive…and Susan Meissner does that wonderfully in A Sound Among the Trees. From the first page I felt as if I was there in that Sunlit Virginia garden and I couldn’t tear myself away.

Sometimes a novel that flips back and forth between past and present can be hard to appreciate…one either gets lost somewhere in between or at best feels as if the continuity of the stories is compromised.  That was not the case with this book.  Holly Oak herself acts as an anchor between the two time periods…between the two stories and in essence…almost becomes one of the characters herself.

And I’ll let you in on a little something…the bogeyman…he is indeed quite real.

And the best way to catch him out?

Cast your gaze into a mirror…

Was it worth my Time?

6 responses to “Book Review: A Sound Among The Trees by Susan Meissner”