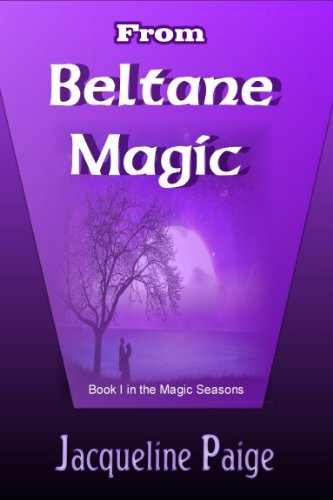 Title: From Beltane Magic
Author:  Jacqueline Paige
Reading level: Adult
Genre:  Paranormal Rmoantic Suspense
Size: 331 pages
Release Date:  January 15th 2012
Publisher: Class Act Books
Stand Alone or Series: The Magic Seasons #1
Source: Book Tour
First Line:  “Leena drove slowly through the massive trees.”
Summary (from GoodReads):
Step into a world of magic and passions….
Take a dash of spice, heat it
Add a flash of magic and watch the sparks fly
Toss in a killer that’s targeting women
Add a handful of witches from all paths to stir it all together…
Each were willing to spend their lives alone and safe; until they’re touched by Beltane Magic.
Can they survive their pasts to be together as they struggle to find a killer before the wheel turns again?
My Thoughts:
What a wonderfully magical story!  Stories with witches and magical realism are my absolute favorites!  Add to that a wonderful touch of romance and some mystery/suspense and I am sold.  This book book delivered in spades. Eight friends reconnect at a gathering for Beltane and uncover much more than they could have anticipated–the bodies of two murder victims and the threat of more to come at the next ritual gathering.  We not only have great magical elements from the start, but also eight solid characters (who I anticipate will be four couples by the conclusion of the series) who we bond with immediately.
Thus starts this great novel which incorporates not only an incredibly realistic portrayal of the very diverse pagan community and some of their traditions and rituals.  It then goes a step further and makes you think…what if…as many of the potions, spells and rituals performed in the book result in enchantingly realistic and sometimes frightening magics.
At the books heart is also a very believable and sweet love story.  In typical fashion each member of the couple must finally let go of his/her baggage and embrace new possibilities and the future to allow the love to flourish.  The reader knows that these are merely a few bumps along the way and that ultimately love will win out as this couple is clearly “meant to be.”
There were numerous typos and other such errors throughout the book.  I kept wishing that I was reading a hard copy and had a red pen on hand.  However these error do not really take anything away from the enjoyment of the story.  I’d say they are a mild irritation at worst but a good editing would do wonders for this book.
Jacqueline’s amazing storytelling more than makes up for any proofing errors.  I was sucked in from the beginning and fell in love with all of the characters which is a credit to her character development skills as well.  I can’t wait to pick up the second in the series and see what happens at Solstice!
Was it worth my Time?

« In My Mailbox – 4/15/12
Book Trailer & Excerpt Reveal: Taste by Kate Evangelista »
Don't want to miss a thing? Subscribe to my newsletter and get all my posts in your inbox!