Vacation destinations
10.   .
I came here twice with my family when I was no more than six or seven, but those holidays have stayed with me. Both times, for two short and eventually heartbreaking weeks, we found ourselves adopted by one of the stray dogs that roamed that seaside town. I still remember the names we gave them: Fleabags, the first one, and Ginger. Both would follow us faithfully down to the beach every day, despite never having so much as a scrap of food from us (our mum and dad said, ‘Don’t encourage them!’ but they followed us anyway). Also, on the second of those two holidays, we made some very good friends – and the heroine of The Storm Bottle is named after the eldest, Bibi. Yes, I have a long memory.
9. .
Beautiful countryside, perfect for a trail ride. I indulged my late-blooming love of horse riding here as a student, riding and narrowly cheating death when my horse fell and rolled on top of me. I was trapped for about five minutes but, curiously, it felt like a lot longer. And it was still one of my favourite weeks away.

8. .
Another trail ride, no accidents this time but similarly perilous. Roaming through the wild and definitely spooky landscape of moors and tors, which look like ancient pagan monuments dotting the landscape, temples to long-forgotten gods. Stand-out memory is trying to ford a river in flood, then celebrating on the far shore with a hip-flask of Rusty Nail (whisky and Drambuie).
7. .
You can visit ‘the real ’ or you can cheat. My fiancée and I cheated, staying in a four-star hotel on the beach, riding elephants, haggling for silks, wrestling with wealthy Westerner guilt. I felt I’d done my time, because:
6. The real .
I went for three weeks with my best friend from school, whose family come from Mumbai. I say ‘the real ’, even so I flatter myself, because we stayed in comfortable lodgings in Mumbai, and (when it was still just about safe to go there). But I did get to see how ordinary Indians live, and to my naïve 14-year-old self it was a sobering experience. I also came down with a searing case of food poisoning which took me a month to recover from. But with the mountains of reflected in the river, you don’t feel the stomach cramps so badly.
5. The , .
Nothing adventurous here, but I cherish this one as my last kid-free holiday. And the grottos along the coast are an adventure playground for any confident swimmer with a casual approach to personal safety.
4. .
Memorable mostly for the visit to . Which itself used to be a holiday resort. Just goes to show: you can never quite relax.
3. Tenby, Wales.
What’s remarkable about Tenby, the quaint little seaside town on the Welsh coast? Nothing really, only that it was where I spent my first holiday away from my family, on a week-long trip with my primary school. That first taste of independence is one you don’t forget.
2. Kurumathi, The .
Our honeymoon destination. The islands are so stunning, even the plane’s cabin crew rush to the windows to look out as you approach.
1. .
I had to finish with . It’s where my step-mother comes from, it’s the setting of The Storm Bottle, and well – it’s just special. It’s fascinated me ever since I first saw that tiny speck on the globe, and then the strange, flying-angel shape of its shores, which also look eerily like a diving whale.
Many legends are told about , but none are quite as fascinating as the truth: that it was the last nation on Earth to be populated by human beings, and that when it was finally settled, it was by accident.  For centuries storms kept sailors at bay, but it was a storm that finally drove the Sea Venture, sailing on a rescue mission to , onto its shores. And it was this event that is thought to be the inspiration for Shakespeare’s play The Tempest.
Some of these strange events are mentioned in the story of The Storm Bottle, which explores mysteries of another kind – including a possible glimpse into what’s really behind the perilous Bermuda Triangle.
And if you want a break from all the magic and mystery, there are some looooovely beaches there too. 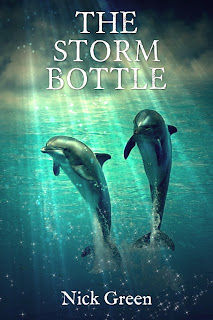 
Swimming with dolphins is said to be the number one thing to do before you die. For 12-year-old Michael, it very nearly is. A secret boat trip has gone tragically wrong, and now he lies unconscious in hospital.

But when Michael finally wakes up, he seems different. His step sister Bibi is soon convinced that he is not who he appears to be. Meanwhile, in the ocean beyond Bermuda’s reefs, a group of bottlenose dolphins are astonished to discover a stranger in their midst – a boy lost and desperate to return home.

Bermuda is a place of mysteries. Some believe its seas are enchanted, and the sun-drenched islands conceal a darker past, haunted with tales of lost ships. Now Bibi and Michael are finding themselves in the most extraordinary tale of all.


I’ve got clear bottles, green and brown, sea blue, sky blue, black and golden amber. Tall ones, thin ones, fat and squat, towers, skittles, teardrops that won’t stand on end, long necks, broken necks, necks with marbles rattling inside. They come round-sided, square-sided, even six-sided, in smooth glass, fluted glass, or frosted by the waves. Lots are embossed with words or pictures: a rat, a cross, a face. Sometimes this tells you what was in the bottle (the rat means rat poison), others, like BLOOD MIXTURE, are mysteries. There are experts who could label each one, but I like not knowing. It’s more fun to pretend they were Prospero’s potions than to be told I’ve found a bottle of Victorian hair tonic.

Nick Green is a UK children’s and YA author, best known for his trilogy The Cat Kin, published in the UK by Strident Publishing and in Germany by Ravensburger, and also as a BBC audiobook. He has appeared on BBC radio talking about his books, and has been shortlisted for two UK children’s book awards. He regularly does school visits and other children’s literary events. The Storm Bottle is his first straight-to-Kindle novel.

« Guest Post & Giveaway: Gretchen Powell, Author of Terra, Talks Dystopians
Book Review: Enchantment (Spellbound #3) by Nikki Jefford »
Don't want to miss a thing? Subscribe to my newsletter and get all my posts in your inbox!